When you decide to declare a method as virtual, you are giving permission to derived classes to extend and override the method with their own implementation.

You tell the compiler that you know that you hide the ancestor function and replace it with this new function and do so deliberately.

Difference between Override and Reintroduce

2. Override is used in conjuction with Virtual/Dynamic methods of parent class but for Reintroduce, parent method should not be necassarily Virtual/Dynamic.

Sometimes there are clear reasons to introduce a new method with the same name, signature, and visibility of a parent method. In those clear cases, introducing a new member is a powerful feature. However, if you do not have a clear reason, then avoid using Reintroduce.
Posted by Naresh Kumar No comments:

Virtual and Dynamic methods are the strong concepts of Polymorphism in Delphi. Dynamic is semantically equivalent to Virtual. Both Virtual and Dynamic directives allows a class method to be override (replaced) by a same named method in a derived class.

You would mark a function or procedure as Virtual or Dynamic when you allow a programmer who creates a class based on your class to replace its functionality.

Virtual and Dynamic may be followed by the Abstract directive. This modifies the effect of the Virtual and Dynamic directives. It means that the current class must not code the method - it is there only as a placeholder to remind and ensure that derived classes implement it.

Difference between Virtual and Dynamic methods in Delphi

Although Virtual and Dynamic methods appear same but there is some differnce in their internal implementation. Virtual methods are implemented with a Virtual Method Table (VMT). There is one VMT for each class. The VMT contains one entry for each virtual method in the class. And that entry is the address of the method.

This allows for very efficient calling. You simply get the address of the VMT which is located at a fixed offset from Self. Then you look up the method pointer by index and call the method.

What this does mean is that if you have a class with a lot of virtual methods, and you derive a sub-class, you will make a brand new VMT with all the virtual methods. And if you have not overridden many of them, then you'll find that the VMTs have a lot of overlap.

This used to matter in the days of 16 bit. The VMTs could take up a lot of space in the executable image (that's what is meant by code size) and you could run out of space for the VMTs. So dynamic methods were introduced. The analogue to the VMT is the dynamic method table, DMT. This is implemented differently to avoid the repetition when methods are not overridden. The downside is that calling dynamic methods is more expensive.

In modern times, since 32 bit, and especially with the very fat executables that Delphi produces, these size issues don't matter. And so all sound advice is to use virtual methods exclusively.

Abstract methods must be virtual or dynamic

Any abstract method should be virtual or dynamic. For example:

will not work and throw following error:

E2167 Abstract methods must be virtual or dynamic

Parent is the Window control where the control is displayed. Owner is the component responsible for making sure it's destroyed. Parent refers to the component that another component is contained in, such as TForm, TGroupBox or a TPanel. If one control (parent) contains others, the contained controls are child controls of the parent.

Example of Owner and Parent

Whenever we try add a button on a panel in a form, we try to make an invisible connection between the components. When a component is dropped on a form at design time, the owner is the form and the parent is the container on which it is dropped.

As we add the button on the panel, the panel automatically is set as the parent of the button while the form becomes the owner.

Parent is required to make a control visible

For a component to be visible, it must have a parent to display itself within. Controls that appear on the screen need to know where to paint themselves, hence the parent property. It specifies the visual container for the control. This property must be specified before a control can be displayed. When you want to create a TButton at run-time, it is important that we remember to assign a parent - the control that contains the button.

The Parent component on the other end determines how the child (i.e. contained component is to be displayed). All the properties like left, top etc are relative to the parent component.

Owner is Readonly while Parent can be changed

Owner property is a read only property and cannot be modified, however parent for a control can be assigned and chagned easily at runtime. The Owner is being set while invoking the create constructor and becomes a read-only property so can't be changed later on.

Allocating and Freeing the memory

The Owner component is responsible for freeing the allocated memory of the owned components. Form is the owner of all the components residing inside it. So whenever the form is destroyed, all the components memory is freed automatically. This is the purpose of ownership.

Not all components have the Parent. Many forms do not have a Parent. For example, forms that appear directly on the Windows desktop have Parent set to nil. A component's HasParent method returns a boolean value indicating whether or not the component has been assigned a parent.

Above code has set Panel1 as the parent of Button1.
Posted by Naresh Kumar No comments:

For example: TTimer component is a component that you can place on a form, but it is not visible to the end-user. So TTimer is only the component but not a control in Delphi. Other examples like TTimer are TXMLDocument, TDatabase, TQuery, TTable, TDataSet, TDataSource etc. These all components play a vital role but never appear in front of the end user.

A control takes up more resources than a component because a control needs extra info about how to draw itself.
Posted by Naresh Kumar No comments:

Following is the code snippet in Delphi to create a zip file.

Following is the code snippet in Delphi to extract a zip files.

ZipFile := 'ZippedFolder.zip'; //This is my zip file
if TZipFile.IsValid(ZipFile) then //Validate zip file
begin
TZipFile.ExtractZipFile(ZipFile, 'C:\DestinationDirectory'); //Extract the zip file
end
else
begin
ShowMessage('Zip File is not valid');
end;
Posted by Naresh Kumar No comments:


Following is the self explanatory code in Delphi XE4 to create XML document using IXMLDOCUMENT and IXMLNODE interfaces. You should have XMLIntf and XmlDoc units in your uses section. Following CreateXMLinDelphi Delphi procedure creates an XML named MyXML in D drive.

By using Delphi XE4 RAD Studio, you can create an XTR file from the given XML file using XML Mapper. XML Mapper Tool is provided in RAD Studio XE4 under Tools -> XML Mapper.

Following are the steps to create an XTR file from XML in Delphi XE4 using XML Mapper: 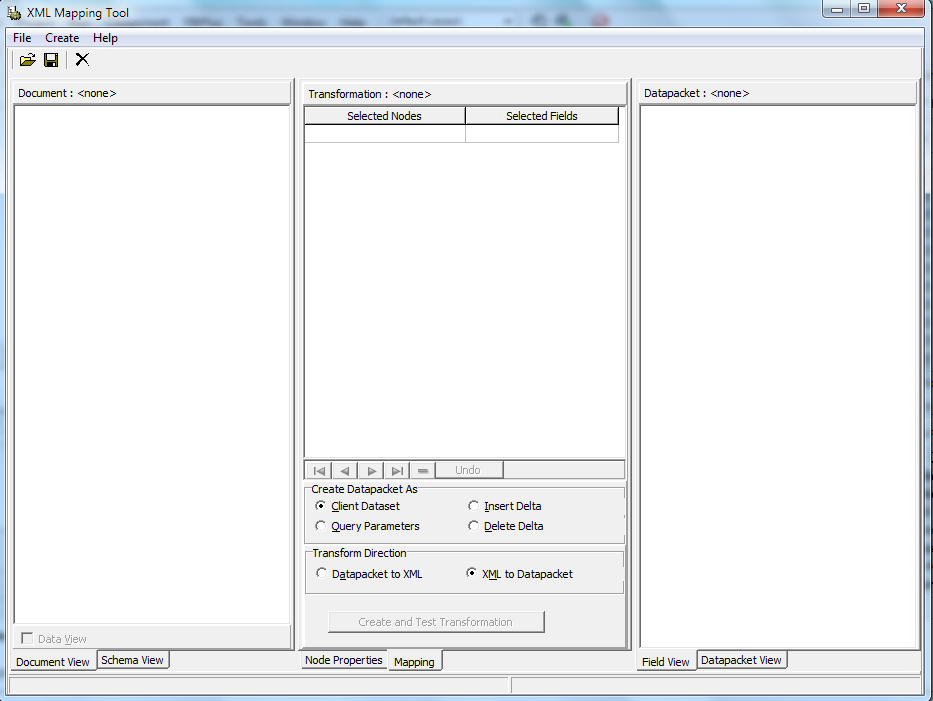 Now load an XML. In my case I am loading following simple XML:

All the nodes will appear on the left section of XML Mapper.

2. Right click on left section and select "Select All Children" option. Transformation will be created on the middle section.

3. Right click on left section again and select "Create Datapacket from XML". You will see the generated datapacket on the right section of the XML Mapper.

4. Hit "Create and Test Transformation" button in the middle section of XML Mapper.

5. Right click on the right section and select "Clear". A popup will appear asking you "Save changes to Transformation to Datapacket?".

I got following XTR file corresponding to the above XML file:

I have more than 10 years of experience in IT industry. Linkedin Profile

I am currently messing up with neural networks in deep learning. I am learning Python, TensorFlow and Keras.

Author: I am an author of a book on deep learning.

Quiz: I run an online quiz on machine learning and deep learning.